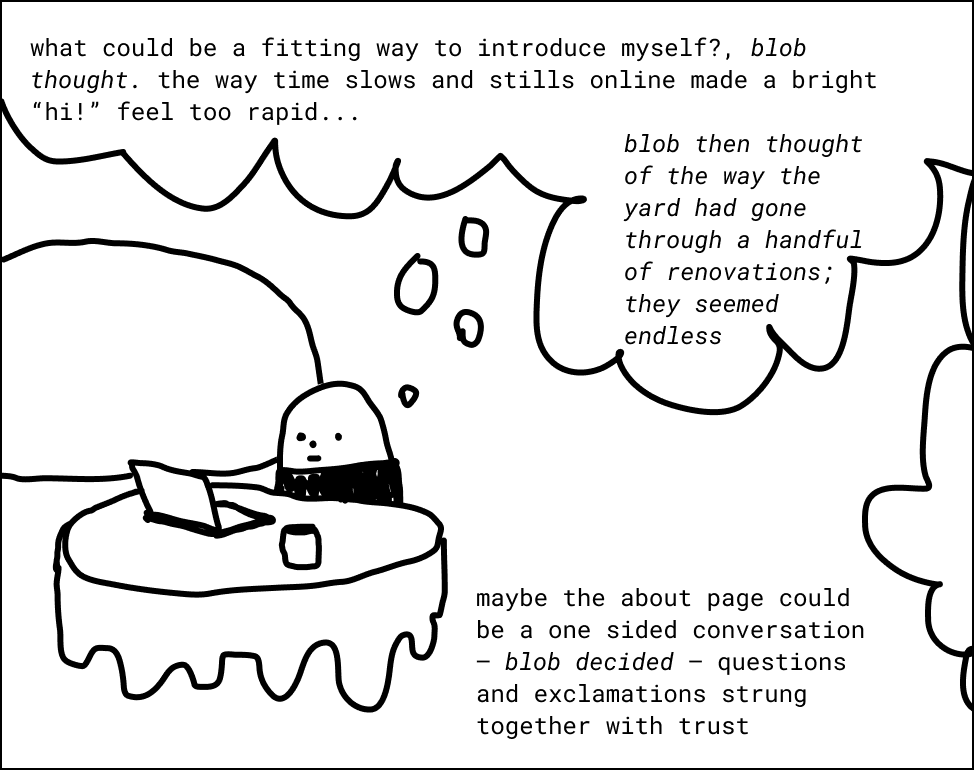 hi, i like to think i'm the yardperson around here. what brings you here?

ah! I hope your stroll has been rejuvenating. I've wanted to take a walk around my neighborhood for a while... I struggle to be still and focus is all. I hope the map up top was self explanatory enough? yeah... this used to be a maze of mirrors. that was when i moonlighted as a self proclaimed fortune teller.

alright, that's reassuring to hear; yeah I went through a few phases of trying to start up renovations again but ultimately decided against it. It's a little tricky juggling the different purposes I'd like this yard to have, if that makes sense? as in, I used to be so so unabashed here and after tending to this area for a while I've grown to aspire to some sort of... mystique, for lack of a better word. hh no i don't. i do think picking up magic here and there is good, though. when's a time you felt as if your present were comfortably foretold? it's that feeling of things falling into place... yeah haha that's what i'm in search of now. i've been very loosely looking into geomancy, so that's something.

yeah. I feel that. I'm trying to return to my earlier state of "blissful ignorance" in a way, if that makes sense? I think instead of questioning my stylistic decisions it's better (and it's more satisfying) to simply experiment and keep pushing it, rather than overanalyze and risk being uncomfortably self-aware. I am very fond of all that's been maintained here, though! it's an honest enough system and it works for me, haha. ah yeah so i'm out of college! it's felt like the ceiling's been pulled away and i can see such an expanse of sky, but lately it's felt a little suffocating. time after school is so fluid and leaky and weird, huh. mostly because it makes use of oppositions and the symbols are cool to draw. and it makes me a little appreciative of what little Latin i can still grasp.

hm — these days i've been falling back into a rhythm and routine, so that's something to be thankful for — but I want to get into writing and (honestly, seriously!!) reading. i used to disappear into books so effortlessly, now whenever I'm going through a text I fight the urge to post about it on some social media network. do you find it difficult to be with yourself online? yes, i do think it's a comfortable space for me... i was talking to a friend about how intimate academia can be — i'm kind of (very) taken to the notion that you could seriously write a forty page paper on some insignificant, mundane, trivial, "useless" topic and have it still be relevant. maybe i like the idea of "elevating" or "rescuing" what might otherwise be refuse... but !! what brings you here? not really, but i'd like to learn more languages. i really got into it because it made me feel vast, i think, because it felt like a secret; yes, when language becomes a kind of encryption. something hidden... that protective quality.

i certainly hope this is a comfortable (enough) space for you, even though i'm half imagining your side of the conversation. i like to think i don't have them, but i've scattered a bunch of random things across this website.

mm i mostly hang out at the window; working on making this site more accessible. though i'd like to revisit the teahouse a little more.

yes, i'm studying design; onto my final year of college.

This website was majorly inspired by Old Sideling Hill and several games from childhood.